Bruce Hornsby Cover Artist updates “The Way it is” Lyrics to reflect 2015 in America. 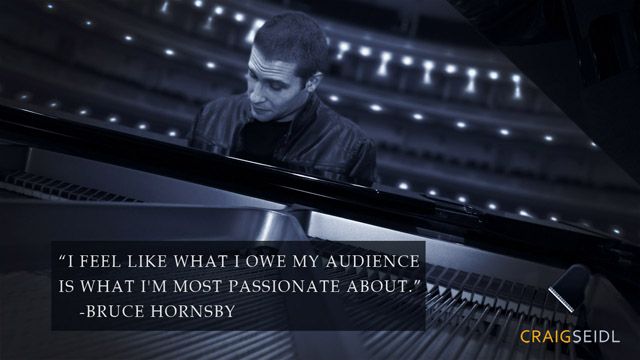 “The way it is,” was originally written in 1985 in Bruce Hornsby’s garage while he lived in Van Nuys, California.  The song portrays 1980’s America, which at the time still had segregation in the south and many of the equality problems we still see today. The opening verse talks about the divide between the rich and poor, while other verses reference the Civil Rights movement. Although some of the lyrics still hold true after 30 years, Craig Seidl wanted to update the lyrics to depict what America is going through in 2015.

“I didn’t initially intend to re-write one of my favorite songs, I wrote the lyrics for an original song but I couldn’t think of a catchy chorus. One night I was practicing “The Way it is” and decided to apply my verses instead of Hornsby’s, it just seemed to fit so well I decided to record a cover.” says Craig.

Craig was inspired to begin writing a new song while visiting his hometown, Kenosha, Wisconsin. Kenosha is a little industrial town north of Chicago which at one point was booming with plenty of blue collar jobs. Over the years many of these industries have shut down almost entirely, leaving these baby boomer laborers struggling to find work in a technologically-driven world.

“I would hear friends and family talking about the glory days and how difficult it is for them to compete with recent graduates that grew up in the digital age. Most of the jobs available today involve the knowledge of software and computers,” says Seidl. In other verses, Craig includes much of what has been going on in our media this year. The droughts that haunt California and the many veterans that struggle to adapt when returning home from the Middle East. You can check out his live performance with the new lyrics below or on YouTube.

Man made a living working on the line, boss says pick up the pace,

30 years of hard work, sweat, and tears, you could see it in his face,

Doing the same thing day in and day out, a computer took his place,

Now he’s doing this best to reinvent himself, at the age of 48

He served our country and sacrificed his life, so we could be free,

They grabbed him out of high school, taught him to fight, sent him to the Middle East

Never went to college or continued school, he doesn’t have a degree,

Now he’s a veteran back home with no job, struggling to live on the streets.

World’s changing at the speed of light but our government standing still.

So many problems but they always fight, they can’t even pass a simple bill.

Climate change and the lack of rain, our farmers can’t grow crops.

Now companies are pumping the earth dry, cause it will increases there stock.

Filmmaker | Musician | Graphic Designer at Craig Seidl
With 15 years of running his own business, he’s built up an extensive resume working in graphic design, film, and music. Craig has had the privilege to work with some of the largest producers, celebrities, and top production companies in Los Angeles. His experience brings a competitive edge to any project, large or small.

0 responses on "Bruce Hornsby Cover Artist updates "The Way it is" Lyrics to reflect 2015 in America."